One of the goals of the Project Manual for reluctant, struggling and poor readers consisted of making materials for working with RSP readers. The material, named methodology in the project documentation, consists of selected text, teacher activities and activities for students, for 90 minutes. Four project partners chose one methodology that they had prepared so far. According to the pre-arranged plan, partner schools in the project: X. Ivan Supek High School (Croatia), Gymnasium Pavla Jozef Šafarika(Slovakia), Nahroni High School (Czech Republic) and Liceo scientifico Giuseppe Seguenza (Italy) conducted data collection with two questionnaires, Initial questionnaire - Questionnaire 1 and then, after each partner implemented other countries’ methodology, another questionnaire - Questionnaire 2. That is, each country collected three separate data on each of the three partner countries’ methodology offered. The methodology developed by each of the partner schools was to be carried out in their country, with another group of students who did not participate in project activities. The procedure was the same, implementation of Questionnaire 1, implementation of 90-minute activities, and then Questionnaire 2.

According to the data obtained in the initial questionnaire, out of a total of 115 students, 65 responded that they did not read in free time. Out of them 65, 36 students would read, but they don’t have time time, 13 would read, but do not know what, 15 students answered that they see it as a waste of time, and 1 student selected the answer that reading was not important and that nowadays it is not necessary.

30% of Croatian students see additional incentive or stimulation in having more free time, and 37% in less school obligations at home. 27% of them would like to get a recommendation for reading (interesting text). The desire to participate in conversation with their peers about what they read was chosen by 4% of students, and only 2% of them answered they needed a quiet corner in their living space.

10% and 57% of Croatian students never or rarely read the texts that are being taught in the Croatian language lessons either in school or at home, and 62% of them think that the texts are mostly not interesting. 16% of them, even without additional reading of the texts being taught, fulfill their school obligations and achieve the success they are satisfied with. 13% never or rarely read out of the classroom due to their out-of-school obligations. 19% of them do not read, because the texts are difficult and incomprehensible.

14% and 53% of Croatian students never and rarely read the texts being taught in the English language lessons outside school. 35% do not do it because the texts are not interesting, and the same percentage of students, even without additional reading of the texts being taught, fulfill their school obligations and achieve the success they are satisfied with.

In partner schools, the situation is as follows:

The largest number of students answered that they would read, but they don’t have time: 23 (Slovakia), 20 (the Czech Republic) and 36 (Italy).

6% and 35% of the students never or rarely reads texts that are taught in the mother tongue in the Slovakian sample outside the of the students classroom (at school and at home), and the largest percentage does not do so because the texts are not interesting (53%). Answers never and rarely for the texts in the English language were selected by 32% of the students and the reason for this is again the factor of a text being interesting to them (35%).

In the Italian sample we find the highest percentage of students who read regularly (48%) and often (32%) read the texts that are being taught in the lessons of the mother tongue. But also among the 20% of those who never or rarely read these texts outside the classroom (25% think the texts are not interesting). 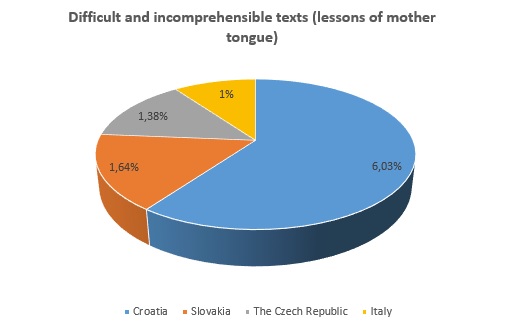 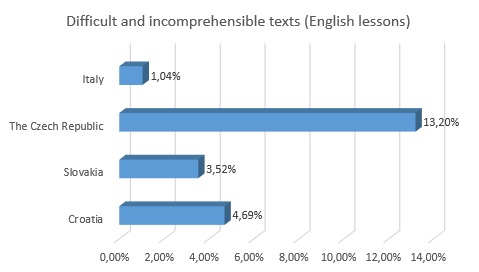 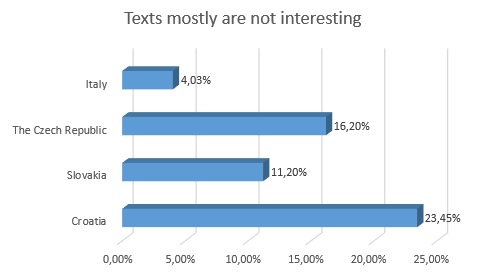 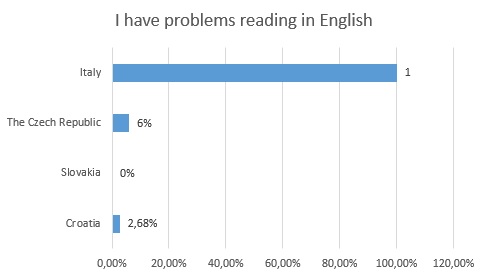 Selected partner countries’ methodologies (text, activities for teachers and student activities) for 90 minutes were conducted with students in each country. After working with the students, according to each partner’s methodology, students filled out Questionnaire 2, so students answered the same questions after each methodology.

All partners conducted their methodology with another group of students in their country.

Therefore, students' responses - shown in the tables - can be traced:

b) at the level of response of all students to the same questions after each of the conducted methodologies.

The questions related to how students felt during their activities in relation to the usual way of teaching - whether they were less or more interested than during the usual lessons of the subject.

Since the students were given texts that are not included in the curriculum, students compared the content of the offered text with the contents of the texts they are usually exposed to during their education - the text is similar to or is different from the majority of the texts they read; the content of the text encouraged them to think about the topic; motivated them to read the text from which the extract was taken in full or to read some other text on the same or similar subject; the text left them indifferent with their content or would like to read more texts of this content. 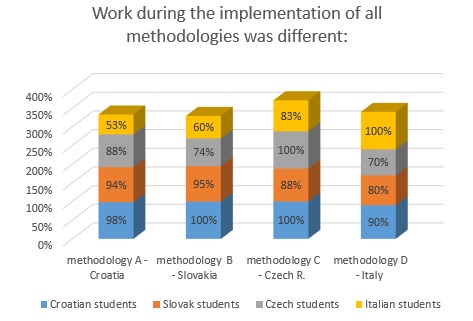 It can be concluded that the highest percentage of Croatian students estimated work during the implementation of all methodologies different from the usual way of working.

The methodologies offered in relation to self-assessment of student activity during their implementation: 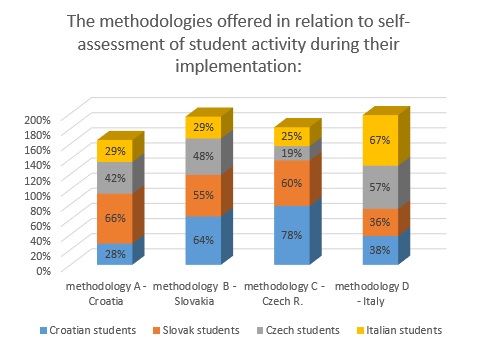 Task data for students was also collected, along with the text suggested within each methodology. Students could evaluate assignments within three categories. Tasks offered within methodology A (Croatia) were more interesting and encouraging to the largest number of Slovak students, 89% of them. 66% of them have self-estimated their activity greater than usual within this methodology. The highest percentage of Italian students, 68% of them estimated their activity as usual; 9% among them estimated tasks to be difficult and incomprehensible.

Tasks within Methodology B (Slovakia) are more interesting and stimulating to 86% of Slovak students. Of the students in partner countries, the highest percentage (74%) of Croatian students evaluated it to be more interesting and more stimulating. And within this methodology, the highest percentage of students whose find it difficult and incomprehensible were Italian students, 11% of them.

Croatian students, 89% of them, and Slovak students, 74% assessed the tasks within methodology C (Czech Republic) more interesting and stimulating. None of the Slovak, Croatian and Czech students in this methodology evaluated them as difficult and incomprehensible, unlike 13% of Italian students who find them difficult.

The last question was to gather information on how much the students who participated wanted more teaching hours similar to demonstrated 90-minute materials and activities in the lessons of mother tongue: 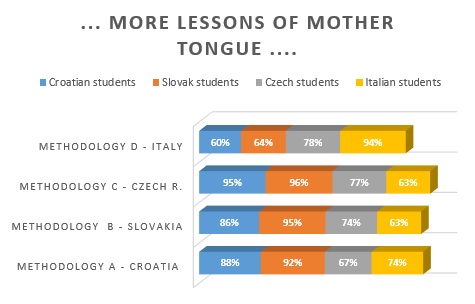 and English as a foreign language 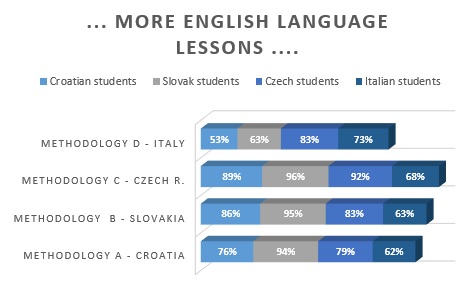