(from the book collection of  The Seven Good Years) 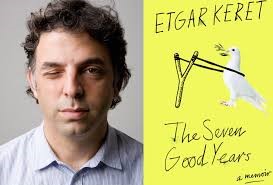 Theme
The theme of the story Jam is based on the build of a very small, narrow house (width of a hundred and twenty centimeters) in Warsaw, where there was once a ghetto with Jewish kids during WW2 who smuggled food for their families. Talking about the episode from his own family, the author describes the scares that the holocaust left on the people and societies.

Being a Jew and a resident in the Middle East, son of holocaust survivors, brother of an ultraorthodox Jew and anarchist fighter for legalizing marijuana. Keret talks about his dream of building a house in Warsaw, the hometown of his mother, place of a ghetto where she smuggled food for her family. On the initiative of a Polish architect, the author realizes his dream and builds a house between a split in memory of his mother’s family, killed in WW2. Making her father’s wish come true of saving the families name, she had a family of her own. When the house was built, above it there was a sign ‘House of Kerete’. The author received a jar of jam from an old lady. That same jam was given by the old lady to the author’s mother. She spread the jam on two pieces of bread and for the two little Jew girls who had to be in the ghetto once the Germans took over.

What are the distinguished readers interests reflected by this book/story?
The consequences of WW2 are still present in the minds of the survivals. Every war scares people in similar ways. In the story, we find out how a little girl survived the holocaust and were given a task from her father – your task is to survive the war and make sure our name is not forgotten. The story reveals how you can survive when you feel the responsibility of your closest ones.

Why is this story motivational for the pupils?
Students find out about the bizarre everyday situations and interpersonal relationships which hide unsettled issues, links and consequences.

Is there a historical, political, multi/inter cultural, migrant or similar context recognized in this book/story?
Looking more in depth, the story brings up the problem of the Status of the Jews in Warsaw during the war and the faith of the little girl who lost her family, due to which she spent her childhood traveling to European orphanages after which, she was sent to Israel after WW2. She started her family there, and unfortunately, her children are reliving the war themselves, between Israel and Palestine.

Is there a principle of inclusion reflected in this book/story and does it promotes understanding of cultural diversities and heritage?
In a subtle way the author askes for her readers to focus on details (ex. possibility for the author to build a house in Warsaw and the meaning of the jam), the story revels the only way to understand differences -  tolerance and good will.

The meaning of the title is revealed in the last part of the book, where the lady gives the jam to the author.  She does that with the intention to tell the story of her mother, the Polish woman, who once a long time ago gave the same jam spread on bread to two Jewish girls before they had to leave for the ghetto and thus disappear from the city.