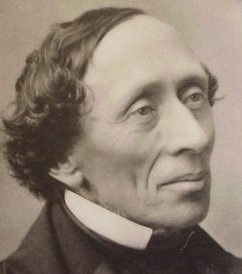 Hans Christian Andersen (/ˈændərsən/; Danish: [hanˀs ˈkʁæsdjan ˈɑnɐsn̩]), often referred to in Scandinavia as H. C. Andersen (2 April 1805 – 4 August 1875), was a Danish author. Although a prolific writer of plays, travelogues, novels and poems, Andersen is best remembered for his fairy tales. Andersen's popularity is not limited to children: his stories express themes that transcend age and nationality. Andersen's fairy tales, of which no fewer than 3381 works have been translated into more than 125 languages, have become culturally embedded in the West's collective consciousness, readily accessible to children, but presenting lessons of virtue and resilience in the face of adversity for mature readers as well. Some of his most famous fairy tales include "The Emperor's New Clothes", "The Little Mermaid", "The Nightingale", "The Snow Queen", "The Ugly Duckling", "Thumbelina", and many others. In 1835, Andersen published the first two installments of his Fairy Tales (Danish: Eventyr; lit. "fantastic tales"). More stories, completing the first volume, were published in 1837. The collection comprises nine tales, including "The Tinderbox", "The Princess and the Pea", "Thumbelina", "The Little Mermaid" and "The Emperor's New Clothes".

Theme
A modern art fairy tale with elements of anti fairy tale. Theme and motives: greed and conceit of the authority, human greed and selfishness, arrogance, narcissism and stupidity of the ruling class and the naivety of common people, manipulation, deceit and fraudulence, the childrens “voice of naivety” (the truth), truth doesn’t always win.

Short summary
"The Emperor's New Clothes" (Danish: Kejserens nye Klæder) is a short tale written by Danish author Hans Christian Andersen, about two fraudulent weavers who promise an emperor a new suit of clothes that they say is invisible to those who are unfit for their positions, stupid, or incompetent – while in reality, they make no clothes at all, making everyone believe the clothes are invisible to them. When the emperor parades before his subjects in his new "clothes", no one dares to say that they do not see any suit of clothes on him for fear that they will be seen as stupid.  The people observed the naked and pompous emperor in wonder and silence, with fake admiration, all until a single child yelled: “The emperor is naked!”. Everybody heard the truth being spoken, but nothing has changed. The emperor resumed his strut with even more pride.

This story is appropriate for the targeted group because of it’s modern fairy tale/anti fairy take genre. This timeless, literary stylized story stimulates a discussion and analysis of selfishness, deceit and greed not only of the ruling class, but also of the individual, political opportunism, manipulation of the consciousness through modern technology th. en and now, the creation of a “virtual attire”, the imperative of beauty and image and everything that calls for a critical rethinking of our society’s standards.

According to polls, the targeted groups of RSP readers are prone to themes of social activism and this tale changes the usual rules of a fairy tale and the happy ending, impinging deeply into the social issues of the relationship between the ruler and the people, wealth, power and manipulations of the masses. There are also other relatable themes to the readers such as: social differences, the psychology of the masses, selfishness and egoism of the ruling class, the lack of empathy, political conformism, the selfie phenomenon of self-obsession, modern egoism, wide spread narcissism and disrupted moral, social and aesthetic values. The story is highly motivational because it’s both timeless and reflective of the serious issues of the current political moment in history.

What are the distinguished readers interests reflected by this book/story?
The readers will recognize the classical values in the contemporary form, to compare and valorise the stereotypical and original, to deepen the awareness of modern literature, postmodernism and to develop a critical relationship according to contemporary social challenges and issues.

Why is this story motivational for the pupils?
The story is extremely motivating for students because they can recognize themselves in many of the personal situations, through an exceptionally good and innovative style, skilfully embedded in the richness and depth of the prose, with close-knit and fresh young humorous and ironic discourse.

Is there a historical, political, multi/inter cultural, migrant or similar context recognized in this book/story?
Through this story the pupils can recognize the historical and political context of egoism and the manipulation of the potentate, the expanding social differences, the immoral abuse of social resources, the inability to properly punish delinquency, the fatalistic acceptance of the current situations and the preconceived inability to make changes, the manipulation of political and commercial marketing through modern virtual procedures and technologies and other common social issues of today.

Is there a principle of inclusion reflected in this book/story and does it promotes understanding of cultural diversities and heritage?
The principle of inclusiveness is covered in the entire novel, convincingly and strongly promoting the ideas of coexistence, criticism of nationalism and chauvinism, the idea of ​​restoring tragically broken relationships, respect and support for differences and the different individuals, empathy, acceptance and understanding of cultural differences. Characters and events represent close and historically driven social and cultural heritage.