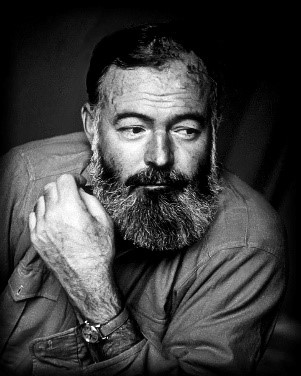 Theme
The themes are childbirth and fear of death.

Short summary
The story begins in the pre-dawn hours as the young Nick Adams, his father, his uncle and their Indian guides row across a lake to a nearby Indian camp. Nick's father, a doctor, has been called out to deliver a baby for a woman who has been in labor for days. At the camp, they find the woman in a cabin lying on a bottom bunkbed; her husband lies above her with an injured foot. Nick's father is forced to perform a caesarian operation on the woman with a jack-knife; he asks Nick to assist. The woman screams throughout the operation. After the baby is delivered, Nick's father turns to the woman's husband on the top bunk and finds that he fatally slit his throat with a straight razor during the operation. The story ends with only Nick and his father on the lake, rowing away from the camp. Nick asks his father questions about birth and death, and thinks to himself that he will never die, as he watches his father row.

5. it promotes understanding of cultural diversities and heritage

The main character is a young boy assisting his father while helping a women in labour. Honoured to have been invited and asked to help he confronts the real adult world although outside his own social surrounding.

What are the distinguished readers interests reflected by this book/story?
The  motifs of entering the world of adults through assisting a professional doctor at delivering a baby. Being adult enough to be invited by your father, to go along and give him a hand.

Why is this story motivational for the pupils?
It raises questions about the fear of death, the treatment of women, tolerance to another person's  suffering. The boy faces the world of adults.

Is there a historical, political, multi/inter cultural, migrant or similar context recognized in this book/story?
There is a historical and political context of Native Americans living conditions as well as the status of women.

Is there a principle of inclusion reflected in this book/story and does it promotes understanding of cultural diversities and heritage?
The principle of inclusion reflected on all pages of the novel strongly and deeply promotes the idea of coexistence, supporting diversity and differency, empathy, acceptance and understanding of cultural differences, historical and social heritage.